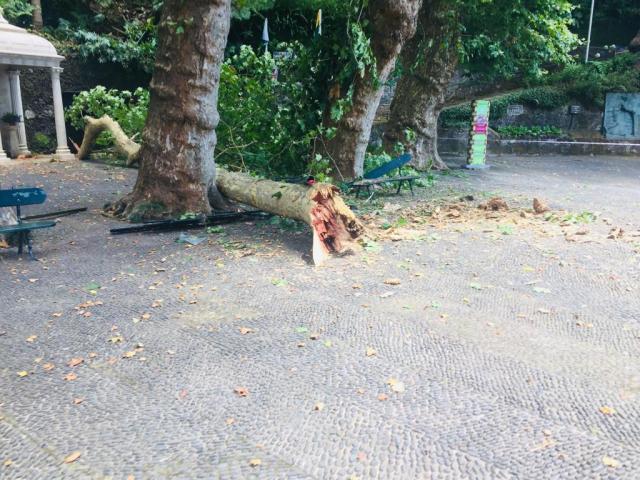 The festivities of Nossa Senhora do Monte, in Funchal, which started on the 5th of August this year, will focus more on the religious aspect of the festival, than on partying and entertainment.

Touching on the events tragic past, the Mayor of Funchal, Pedro Calado stated:

“The most important thing is that we give peace of mind, and allow people to feel secure and safe during the festivities.  People have stopped coming to the event because of its tragic past, but we have to move on.  The past is the past, let’s learn from its mistakes.”

The Mayor, who held his press conference in Largo da Fonte, in the parish of Monte, where five years ago, on the 15th of August 2017,  a large oak tree fell from an adjacent plot of land onto the crowd waiting for the procession to pass, killing thirteen people and injuring dozens of others.

“Evidently, after what happened in 2017, and after the two years of the pandemic [2020 and 2021], we intend to resume the festivities, but above all we want to have a party with a much more religious impact than festive,” added the Mayor, “stressing that it will be a ‘more controlled’ festival.”

The Mayor explained that, for safety reasons, no rockets will be launched, and all loudspeakers are directed towards the road to prevent the land around the parish church, from being disturbed.

Thirty-nine food and drink stalls were licensed, and the musical entertainment is in charge of several traditional music groups and philharmonic bands, spread over three areas: in the churchyard, in Largo da Fonte and in Largo das Babosas.

The festivities of Nossa Senhora do Monte began on August 5th, with the holding of the first novena, and end on the 15th, with the celebration of a mass presided over by the Bishop of Funchal, Nuno Brás, followed by a tradition procession which includes several regional authority officials.

At today’s press conference, the mayor of Funchal said that the requalification of Largo da Fonte was being studied, a project he said that was a “commitment of the municipality” and which will be completed “as soon as possible.”

In August 2021, a few days before the Feast of Nossa Senhora do Monte, the municipality of Funchal, then governed by the Trust coalition (PS/BE/PDR/We, Citizens!), proceeded to cut down all the centenary trees in Largo da Fonte, after the fall of a large branch, which did not cause damage or injuries.

15 plane trees and a chestnut tree were felled on the adjacent slope.

The feast of Nossa Senhora do Monte dates from the beginning of the island’s colonisation and was until 2017 one of the largest and most popular festivals in Madeira, and the devotion of the Madeirans is linked to a tragic moment in the history of the island, when in 1803 a landslide caused killed approximately one thousand people.

To help face this calamity, the diocese of Funchal declared the Senhora do Monte as the patron saint of Madeira.