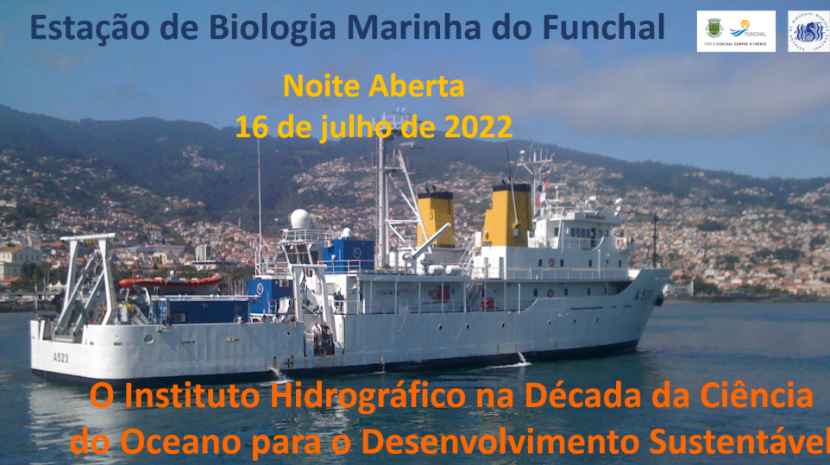 Since its foundation in 1999, the Funchal Marine Biology Station has held an ‘Open Night’ event during July, August and September, which aims to encourage the general public to attend a guided tour of the Station between 20:00 and 21:15, and listen to an informative lecture afterwards.  This month’s event is tomorrow, the 16th of July.

Commander Miguel Bessa Pacheco is a Hydrographic Engineer, with several master’s degrees in this scientific area. He carried out several technical-scientific missions aboard ships and hydrographic launches. From 2009 to 2011 he commanded the hydrographic vessel Almirante Gago Coutinho.

Since 2004, he has been a member of scientific conference committees in the fields of cartography, geodesy, hydrography, hydrographic engineering and oceanography. He has about 80 articles published in specialist journals and proceedings of national and international conferences. He is a member of the Order of Engineers, the Lisbon Geography Society and the Academia de Marinha.

The Hydrographic Institute (IH), is an organ of the Portuguese Navy and works under the direct dependence of the Admiral Chief of Staff of the Navy, with the competence relating to the definition of strategic guidelines, as well as the monitoring of their execution, exercised by the Minister of National Defense in conjunction with the Minister of Science, Technology and Higher Education and the Minister of the Sea. The IH is recogniaed as a State Laboratory, enjoying administrative and financial autonomy.

The IH’s fundamental mission is to ensure activities related to the sciences and techniques of the sea, with a view to its application in the military area, and to contribute to the country’s development in the areas of science and defense of the marine environment. The IH’s Vision is to be a reference centre in the knowledge and investigation of the sea.

Among many other activities, the IH carries out hydrographic surveys and produces cartography for navigation at sea under national jurisdiction and has played a very important role in the process of extending the Portuguese continental shelf. Its ships have carried out various types of work in the waters of the Autonomous Region of Madeira.

The Funchal Marine Biology Station and the Funchal Natural History Museum have, for many years, had a close collaboration with the Hydrographic Institute, which resulted in this visit to Funchal by its Technical Director.