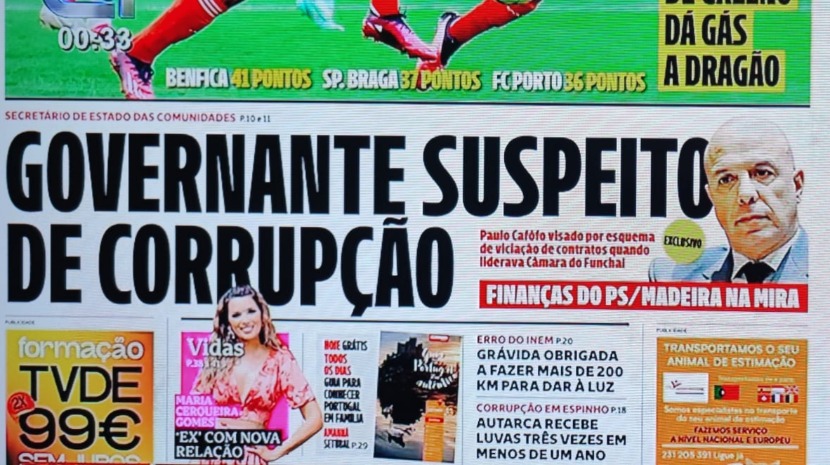 The Public Prosecutor’s Office is investigating the current Secretary of State for Communities, and the former mayor of Funchal, Paulo Cafôfo, in an investigation involving suspicions about the activity of four Madeiran municipalities and PS Madeira.

Correio da Manhã released the story this morning, claiming that Paulo Cafôfo will be one of the main suspects in this process, which will investigate numerous public contracts concluded between the municipalities of Funchal, Machico, Porto Moniz, Ponta do Sol, and several private companies.

The suspicions relate to the participation of the former PS-Madeira leader in an alleged scheme to award public work contracts to private companies in the advertising and construction sector, as a way to finance the party. According to the same source, alleged crimes of corruption, influence peddling, economic participation in business, and abuse of power will also be investigated.

It should be noted that this investigation  was originally reported in JM in October 2020 and that the Attorney General’s Office confirmed to local newspaper, JM, that the Public Prosecutor’s Office and the Judicial Police in four municipalities in the region were obtaining evidence with regard to “possible crimes of economic participation in business, active corruption, passive corruption, influence peddling and abuse of power.”

The investigation originates from an anonymous complaint sent to the authorities in 2016.

Responding to the allegations, Paulo Cafôfo has said that he has been aware of the initiation of an investigation procedure at the DCIAP in 2018, he was not aware, until now, of the specific terms of the investigation.

He went on to say that he is not aware of any fact that can indict him of the practice of any criminal offence, having always “exercised political functions with smoothness, transparency, and respect for legality, in favour of public interests.”

Concluding, he said that he looks forward to the conclusion of the investigation process, reiterating his readiness to cooperate with the judicial authorities at all levels.