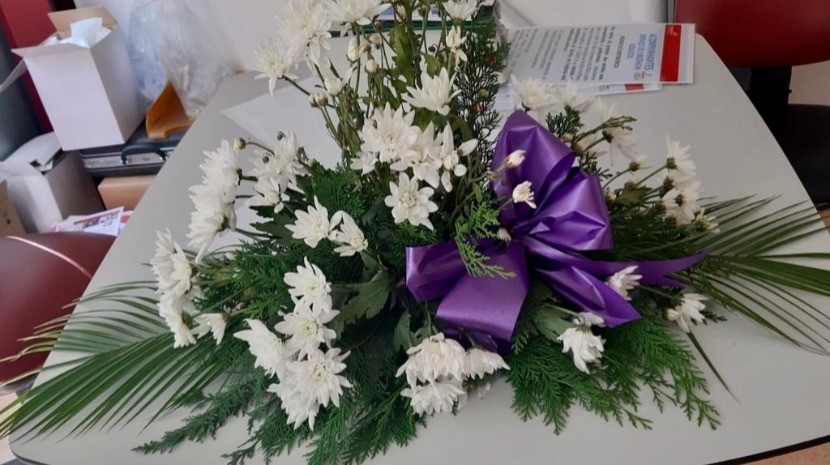 Nurses and staff at the Accident and Emergency department (A & E), at the Dr. Nélio Mendonça Hospital received a surprise when a funeral bouquet was delivered anonymously this morning. The flowers, according to the attached note were in protest for the ‘disgraceful service the sender had received,’ when they were admitted to A & E on the 6th of September.

Later on in the day, the sender contacted local newspaper JM, to explain their actions.

Dinarte Abreu Rodrigues, an employee at a funeral home, stated that the flowers had not been sent anonymously, but purely as a way of expressing his anger at how he had been treated during a visit to A & E last week.  While talking to the editor of the paper, he said that despite being in immense pain, he was kept waiting for more than three hours. Unfortunately his comment of ‘if this takes any longer I will have to go private’ to a passing nurse, resulted in her forcibly removing his healthcare identity bracelet, prompting him to leave and seek help privately.

However, in his note to the staff at the A & E department, he says: –

“My biggest thanks go to the nurse who tore off my identification bracelet with tremendous speed when I approached and said that I could no longer bear the pain I was in, and that, if I wasn’t seen soon, I would have to go seek care at another hospital. Thank you for encouraging me to leave…”

Furthermore, Dinarte Rodrigues wrote that he was a “great supporter of the new hospital in Madeira,” but that “today, he realised that it must be useless, if the lack of care continues to be what he experienced.”

“Because everyone is guaranteed a job and a salary at the end of the month, even if they do something or do nothing at all.  I know that my complaint and gesture will fall on deaf ears, and may even be treated as a joke, but one thing is certain: if the cap fits, wear it!. Finally, I would like to apologise to all the hard working professionals at the hospital, unfortunately, I didn’t meet any.  However, if you fall into the former bracket, show yourselves and be recognised and valued, as you do not want to be confused with those who have no feelings towards the working class. Finally, I would like to honestly thank the secretary and security guard who genuinely helped me – Thank you!”

I would like to point out that the health care professionals at the hospital who dealt with my father’s accident, and care for my mother’s on-going cancer treatment have been nothing but kind and supportive.  We all have bad days!