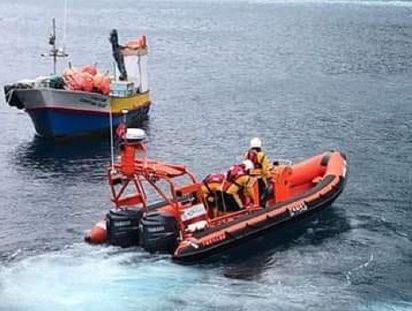 On Sunday the 9th of August, a man fell from the Miradouro do Guindaste, in Faial.  Minutes later his body was seen in the sea only to disappear.

On receiving the alert local firemen, Sanas, Maritime Police, and the Public Security Police worked together in a coordinated search for the man.  Hours later the body remained undiscovered, and the worst case scenario was brought into play, with members of the PSP searching for him inland, while Sanas and the maritime police searching for the body at sea.  All searches were coordinated by the Regional Rescue Operations Command (CROS).

Earlier today, the 10th of August, the Commander of Sea and War, José Luís Guerreiro Cardoso confirmed that the mans body had been discovered, retrieved and handed over to the relevant authority.

The man who was well known in the area made a habit of visiting the viewpoint with his son, and it has been suggested that the son accompanied his father for ‘psychological reasons.’

The viewpoint is located at the side of the mouth of Ribeira do Faial, Santana.  With its spectacular views over the Atlantic it has become a very popular attraction for both Madeiran’s and visitors to the island.