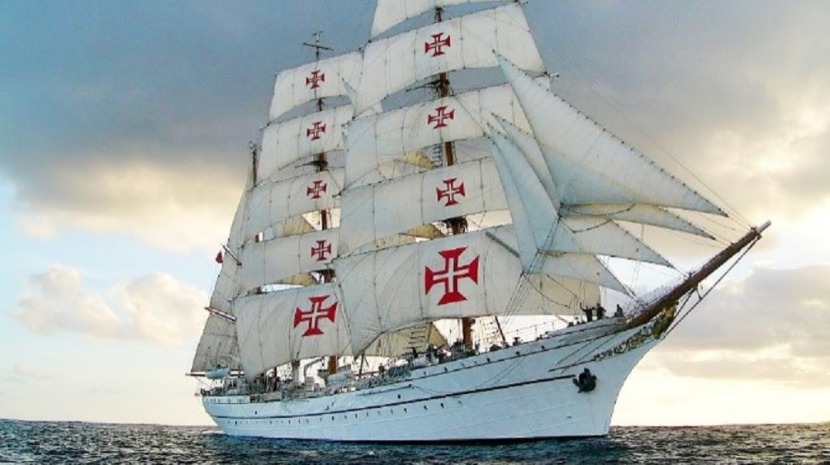 NRP Sagres left Lisbon on Sunday the 24th of July, and will participate in the 200 Years of Brazilian Independence Commemorations.  At the same time, the voyage will be used as an instructional trip for the 2nd year cadets of the Naval School.

As such, the NRP Sagres will dock in the port of Funchal from the 29th of July to the 1st of August.

The NRP Sagres will also call in at Salvador da Baía, Rio de Janeiro, and Mindelo (Cape Verde). The 88 day voyage ends on the 20th of October, of which 74 days will be spent at sea, thus contributing to a navigation time of approximately 1,800 hours and a total distance covered of 9,320 nautical miles.

100 litre Madeira Wine Pipa on board

The Portuguese Navy, in partnership with the Instituto do Vinho, do Bordado e do Artesanato da Madeira, IP-RAM, will load 100 litres of Madeira Wine on board NRP Sagres, during its stay in the Port of Funchal.  Known as “Wine on the Wheel,” this practice dates back to the 17th century, at a time when Madeira Wine was transported to the Indies in the holds of ships. Quite often during these voyages, the wine returning to Portugal had matured, increased in quality and taken on superior characteristics.  Because of this, barrels of Madeira Wine began to be sent regularly to the Indies, with the sole purpose of maturation.

The NRP Sagres sailboat with 90 meters in length, has four masts and a barge frame.  The ship was built at the Blohm & Voss shipyards in Germany, and officially launched on the 30th of October 1937.  She will be 85 years old this year, having spent 60 years in service with the Portuguese Navy.

She is commanded by Frigate Captain Mário António Fonte Domingues, and has a crew of 157 sailors, of which 46 are 2nd year Naval School Cadets.