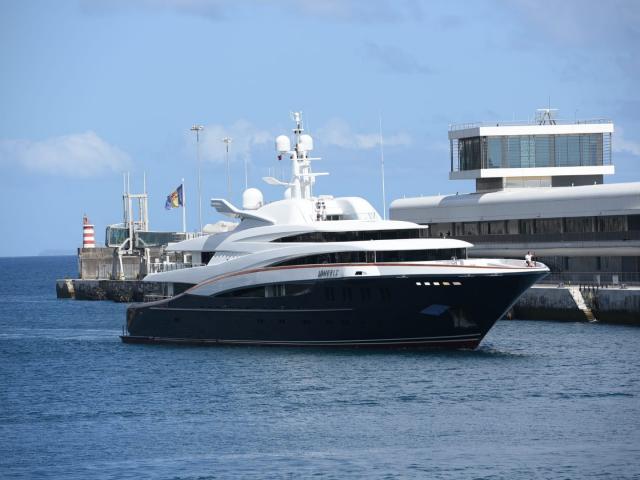 The ‘Wheels’ mega-yacht docked at this afternoon (3rd of June) at 4:16 pm in the Port of Funchal, marking a new phase in the island’s post-lockdown recovery. Although only stopping to refuel before departing for Gibraltar later this evening, it was seen as a remarkable moment, not only as maritime activity is essential for the island’s economy, but for many, it was an emotional moment as they watched the first foreign ship arrive in the port after nearly three months of isolation.

‘Wheels’ who is managed by Transinsular Madeira, and flies a Maltese flag, sailed from Palm Beach, United States twelve days ago.  Designed by Sam Sorgiovanni the yacht was built in 2008 by Oceanco, who are based in the Netherlands.

The Wheels mega-yacht (76 meters) has a steel hull and an aluminum superstructure and 22 crew members. The vessel, previously named ‘Anastasia’ can carry up to 12 passengers and has six luxurious cabins. Among a wide range of amenities, there is a swimming pool with solarium, gym, disco, cinema, swimming platform, two side folding platforms on both sides and a helipad.