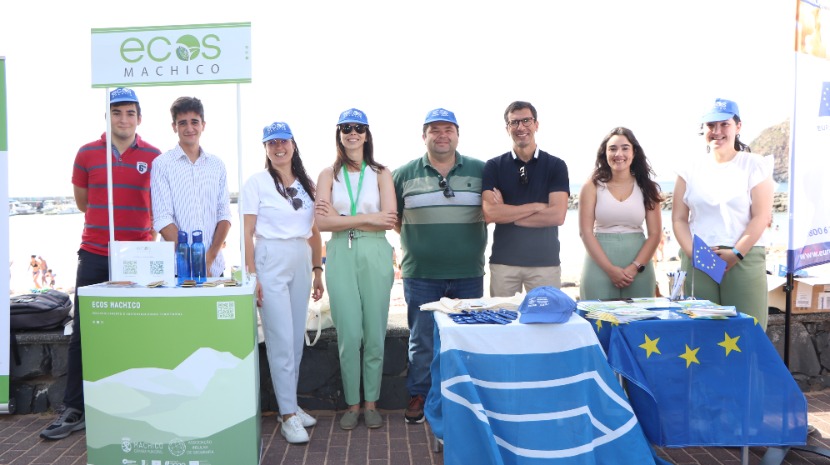 Today marks the first anniversary of the ECOS Machico Interpretive Centre (CIEM), a space dedicated to the development and territorial sustainability of the county, with the research, enhancement and promotion of the Natural and Cultural Heritage of its Ecosites.

The old Municipal Market has, since August 2021, had an “open door policy” for those who live and visit Machico, providing new resources and services focused on a territorial marketing strategy aimed at disseminating the county’s heritage. Among awareness-raising actions, visitors and other participation, ICES has already received more than 6400 visitors within its first year, and has promoted more than 31 informative and/or didactic actions for different target audiences.

To celebrate this day, the Ecos Machico project team promoted an action to publicise the Ecosítios on Banda D’Além beach, raising awareness of the importance of their preservation and distributing to bathers informative materials, gifts and even didactic games for children along the themes of Biodiversity, Geodiversity and Ecosites.

The Ecos Machico project has already nominated 28 Ecosites, with a further 17 sites of interest currently being analyzed for possible nomination, most of them identified in field research work or by public participation. These are, mostly, sites of interest for Geodiversity, Biodiversity Sites, Panoramic Points and Sites of Historic-Cultural Interest in the municipality of Machico.

Also during this year, the release of a documentary dedicated to the natural and cultural heritage of the county is planned, with filming to start very soon. Ecos Machico is a project financed by European funds through the Proderam programme, taking place in the municipality of Machico since January 2021, promoted by the Municipality of Machico and the Insular Association of Geography.