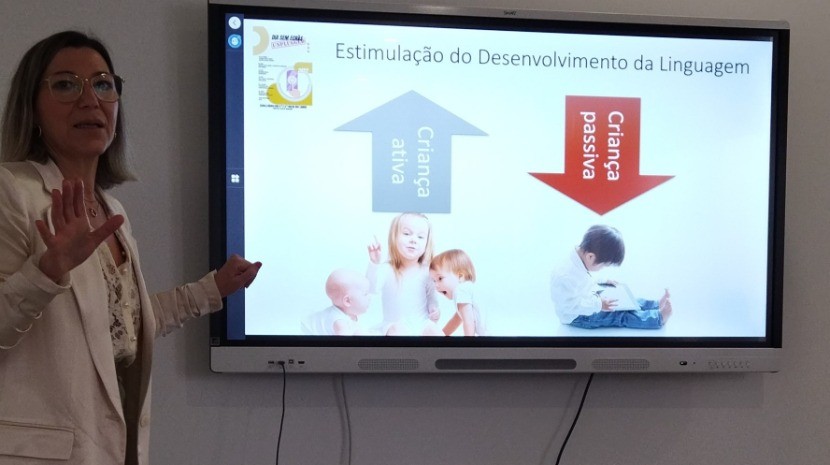 Excessive exposure of children and young people to screens carries serious risks and increases the likelihood of damage to communication, linguistic, cognitive, socio-emotional and physical development, and is currently considered an emerging public health problem.

The declaration was made by speech therapist Ana Marques, this morning, at Escola Básica dos 2º e 3º Ciclos dos Louros, during a conference on the theme “Growing up with screens. The impact on language,” addressed to technicians and teachers specialising in the areas of ​​education and inclusion.

According to Ana Marques, who works for Regional Health Service and in the private clinic, the effects of prolonged exposure to cell phones, tablets and computers from very early ages are beginning to worry the regions health authorities, to the point that SESARAM’s child psychiatry service is already receiving cases of addictive behavior in the spectrum of new technologies.

It is estimated that in Portugal around 73 percent of young people aged between 14 and 25 have symptoms suggestive of internet addiction and that 25 percent of this population is already clinically diagnosed as dependent.

And the problems reveal themselves very early on. “One in three children enters school with a developmental delay,” explains the therapist, who is not unaware of the fact that screens are replacing personal interactions, face-to-face contact, and play at such an important stage of childhood brain maturation.

An exacerbated and unmediated use of screens by adults has relevant impacts on the health of children and young people. The speech therapist highlighted the delay in language development, increased aggression, impairments in attention and school performance, impairment of writing and reading skills, as well as limitations in interpersonal interactions and disturbances in both sleep and food. Associated sedentary lifestyle is also another concern. Situations that can be prevented by raising awareness among parents in health centres, and in schools.

Ana Marques sees early intervention with families as the key to managing in a balanced way the “tsunami” generated by globalisation and the democratisation of the internet and new technologies. You have to warn early on.

“The illusion that a cell phone or tablet in the hands of a child works as a “soothing” is false and entails risks” hence, exposure should be gradual and monitored throughout childhood and adolescence, ideally under the mediation of parents and educators.

Concluding, she wanted to reiterate that “new technologies, as long as they are used with discretion and common sense, are a valuable ally in the process of developing the youngest, helping in the visuospatial coordination, in learning and in the development of skills such as multitasking.”

Ana Branco Marques is a doctoral student in Cognition and Language Sciences, and has a master’s degree in Speech Therapy – language pathologies.