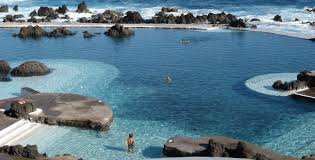 The Mayor of Funchal, Miguel Silva Gouveia, says that this year’s bathing season is a washout as all public gatherings are prohibited until the beginning of September.  In a statement, the Mayor of Funchal said due to the Covid-19 pandemic, this year there would be no bathing season as in previous years.  However, he says that people can still visit beaches and bathing complex’s under strict supervision. What is forbidden is access to areas where clusters of people may congregate.  This guidance was issued by the Madeira Health Administration Institute (IÁSAUDE) which prohibits any gathering of people for 90-working days after the end of the State of Emergency.

Miguel Silva Gouveia pointed out that the 90-working day rule cancels all events en masse, whether indoors or outdoors, and stressed that beaches are, by their nature crowded places.  He went on to say that the current state of emergency is effective until the 2nd of May and after adding 90-working days, the 6th of September will be the first day any relaxation of the rules can take place, and by then, the bathing season will almost be over. Furthermore, the President of the Republic may prolong the State of Emergency for a further 15 days after the current one ends, which leads us to the 17th of May.

The Mayor of Funchal said that the only way they could allow access to the beaches was to impose the same restrictions enforced on public transport and that was by limiting access to a third.

The problem here is that prolonged inertia will not only destroy what’s left of the island’s economy but affect the health service as mental health and physical issues arise as people try to exist for another four months, with no money, increasing debt, nothing to look forward to and no real physical outlets.

Moreover, incidents of direct animal cruelty are rising as boredom increases.  Who says this, not unlike the virus itself, will not cross over and affect human life as well?