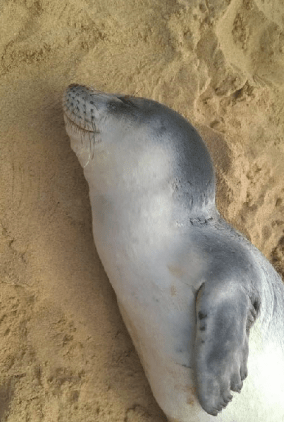 By Samantha Gannon on 6th February 2020

In a recent interview with journalists at the Teatro Baltazar Dias, biologist Rosa Pires from the Institute of Forests and Nature Conservation announced that the population of fur seals (Monk Seals) has increased from six to eight animals in 1988 to its current number of twenty-five.
She went on to say that the importance of protecting these animals is paramount as its the rarest and most endangered seal species in the world and the only seal that exists in Portugal. It is a vulnerable species and needs to be cherished by all of us to ensure its survival. Luckily, Madeira’s conservation programme which started in 1988 has allowed the species to increase, albeit slowly.

At the time of the launch of the project in 1988, only six to eight seals were living in our coastal waters and now, thirty-two years later we have twenty-five.

Due to projects such as ‘Life Madeira Lobo-Marinho’, which ended last year, we know the exact number of the seal population, the threats to this animal and what we can do to help the species recover in the long-term. Among the existing threats are ‘natural ones,’ and the most difficult to control, namely, the birthing ‘habitat of the seals in caves and rocky areas. Unfortunately, many of the seal’s births coincide with stormy weather meaning that a large proportion of pups die in their first year.

Rosa Pires explained that in some years when only four seal pups are born, at least three die. As much as this is difficult to predict we are doing more to help increase survival rates by removing fish traps that are a constant threat to young seals especially as the Desertas Islands, are the seals breeding ground as well as preparing them for their first hunting trips. As these traps are a major threat the Regional Government has decided to initiate a process to ban traps of any sort in the waters around the Desertas Islands.