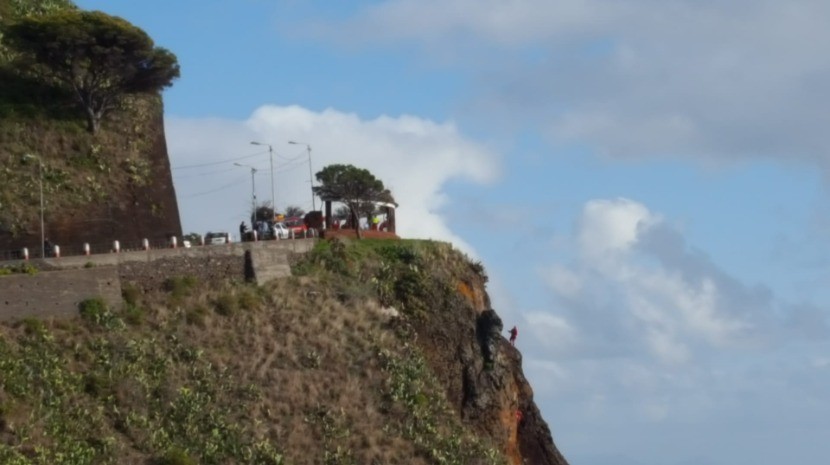 In a statement, the Captain of the Port, and Local Commander of the Funchal Maritime Police, in conjunction with the Funchal Maritime Search and Rescue Coordination Sub-Center (MRSC Funchal) and the Regional Civil Protection Service, coordinated this week the rescue of a body at the base of the cliff near the Pinnacle viewpoint in Funchal.

The note states that an alert was received at about 4:15 pm via a telephone call to the MRSC Funchal, requesting the support of sea rescue as a body had been spotted in the sea.

Maritime Police officers from the Funchal Local Command were immediately dispatched to the site.   Also in attendance were a diving team from the Madeiran Volunteer Firefighters onboard the SR40 Shipwreck Relief Institute vessel. Supporting them on land were PSP officers and members of the Voluntary Firefighters Madierenses – rescue team.

The body of a man was located at about 6:03 pm and recovered at 8:22 pm.  The man is supposed to have allegedly fallen from the viewpoint.

The Funchal Maritime Police Local Command took control of the operation, and the judicial authorities have been informed.

Today, the 7th of January, a statement was issued saying that the man who threw himself from the Pinnacle probably committed suicide.  The man, Damião Martins went to prison for stabbing his brother in Nogueira, Camacha in 2011. Upon his release two months ago he returned home but has said to have been suffering from depression. A condition that his family say was not followed up by the competent authorities; neither was his reintegration into society.

Damião Martins, according to friends and family, felt useless now that he was free and always walked with his head down. The family assured reporters that they gave him all the support they could, but he was a difficult man to reach. They think guilt overtook him because, ironically, he and his brother “went everywhere together.”