Study on How Rising Oceans Could Wreak Havoc on The Algarve 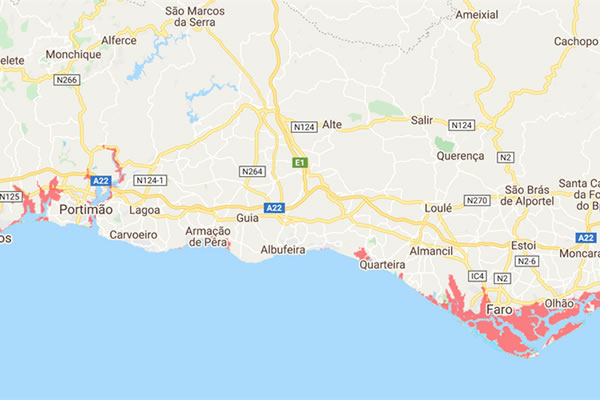 A study released earlier this week predicts that even with drastic cuts in pollutant emissions, rising water levels will put 300 million people at risk worldwide by 2050. Asia will be the hardest hit; and in Portugal, the Tajo and Sado estuaries, Ria Formosa, Aveiro, and Figueira da Foz are the largest “red” zones.

The idea is that estimates made so far did accurately take into account how many people live in flood zones. This is the explanation of one of the authors of the study published on Tuesday in the Nature Communications journal, by Benjamin Strauss. In the past, it was believed that only 65 million lived in these red areas; Based on more accurate data, the study points to 250 million, almost quadruple the originally accepted value.

Portugal, due to its expansive coastline, has several risk zones. In the interactive map provided by the study authors in collaboration with the Climate Central organization, there are several “red” areas marked: Aveiro, the Tejo estuary, the Sado estuary, and Ria Formosa.

Apparently neither Madeira nor the Azores are risk zones for 2050. But Dr. Strauss draws attention to the need for governments and aerospace companies to provide more accurate geographic elevation data in more isolated locations.

One of the most striking aspects of the study is that, despite showing various scenarios, depending on the measures being taken now and the speed of ice thawing, the predictions for 2050 change very little despite these variables: it seems that the study has concluded that we are too late to change anything 31 years from now.

The study’s stark conclusion is because sea level rise is deemed as one of the irreversible consequences of climate change. This is mainly due to the melting of icebergs at the poles, as a recent report by the international panel of scientists advising the UN on climate issues assures.

However, on a more optimistic note, for 2100, the changes that we make now could make a big difference depending on extremity of anti-climate change measures put in place. In the most optimistic scenario (a rapid reduction in greenhouse gases and a slowed thawing process), it is estimated 340 million people will be in the red flood zone. At its worst, with rising emissions and thus a high level of melting ice, the number of people at risk increases to 480 million. These projections are however based on the current population.

That is, they do not take into account possible variations in the number of people living in the areas concerned. The authors of the study leave a caveat: If you want to limit this impact, you have to do something. To begin with, the study pushes politicians to comply with the Paris Agreement, which sets an objective of the rise in the average global temperature not exceeding a two degree increase from the pre-industrial level, and ideally below 1.5 degrees difference.

Re-printed by kind permission from The Algarve Daily News