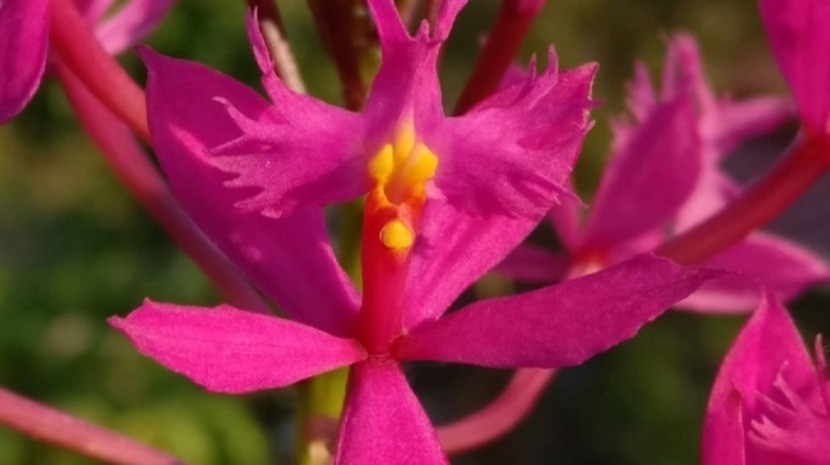 The official presentation of orchid ‘Epidendrum Ribeira Brava Flamedrop’ to the Mayor of Ribeira Brava this week, further endorses Pedro Spinola’s project to increasing Madeira’s presence on the botanical landscape and place the region on the international orchidopilia and gardening map.  During the presentation the Mayor, Ricardo Nascimento praised the project and said it was ‘an honour for the municipality to be the first county in Madeira to be honoured with this new plant.’

According to a press statement, orchids are undoubtedly a group of plants that attract the most attention and curiosity among the general public, and Madeira has the perfect conditions for its cultivation, thus justifying the creation of this type of orchid and future species.  Also, through cultivation of new orchids the region will attract further development and interest, especially as all new types of orchid have to be officially registered with the competent authorities.  Furthermore, by creating new names for the species which tie in with the region, such as ‘Epidendrum Ribeira Brava Flamedrop.’ Meaning that different municipalities will be honoured as Madeira’s orchid breeding expands.

Like all plant breeding, this is a ‘slow and complicated process, given the specification of this type of plant.  But it all begins with this creation, the first orchid to be registered in honour of the municipality where it was cultivated.

The press statement concluded by saying that ‘the creation of new hybrids is a lengthy process, especially as official registration can only take place once the first flower has flowered, and there is no way of knowing until then if the same crossbreeding has already taken place somewhere else in the world.

Madeira’s ‘Epidendrum Ribeira Brava Flamedrop was registered with the Royal Horticultural Society on the 29th of June this year.  The suffix ‘Flamedrop’ was chosen, as when the flowers are closed, they resemble ‘drops of fire.’