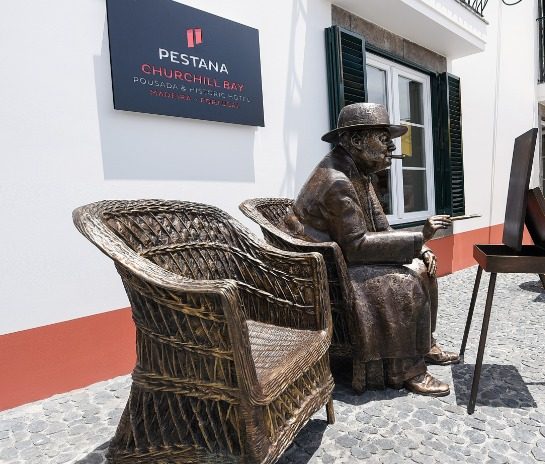 Taking inspiration from the famous famous painting of the former British Prime Minister and Nobel Prize winner for Literature, Winston Churchill, the 57 bedroom hotel commands stunning views over the bay Câmara de Lobos, while a statue of Churchill painting presides majestically on the terrace. Churchill visited Madeira for the second time in 1950.  He first visited the island on the 17th of October 1899 when he was sailing to South Africa on the RMS Dunnottar Castle as a newspaper correspondent reporting on the Boer War.

During his speech, the President of Madeira said that the region must continue on its the path of investment, growth and the realisation of work to ensure employment for future generations.  Praising the entrepreneurship of the Pestana Group and thanking the hard work and vision of Câmara de Lobos Mayor, Pedro Coelho, the president went on to say that ‘unlike other chambers in Madeira, who spend their lives in small talk and doing nothing to benefit the people, we have a mayor who is elected and who works, creates jobs, brings development to the area, and is committed to achieving goals.’

Of course, things took a slightly political turn as the president used the inauguration to take a swipe at PS presidential candidate, Paulo Cafôfo, who he likened to Icarus, saying that he hoped ‘the sun did not melt the wax wings of this Icarus.’

Politics aside, the inauguration was accompanied by a musical performance by four tenors in the bay of Câmara de Lobos, street entertainment and a firework display.